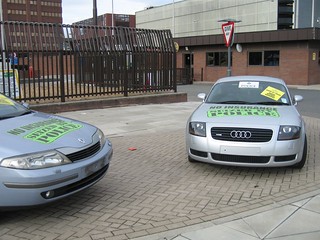 It’s no secret that premiums are still higher than they’ve been in years, but did you know you can save quite a bit of cash by switching to a telematics policy?

You’ve undoubtedly heard of telematics, the new motor car insurance cover craze that’s been sweeping the nation over the past few months. The satnav-based tech promises amazing results, the least of which are discounted car insurance rates, but there are so many more reasons to consider a telematics insurance policy if you’re looking for a way not just to save money, but to make roads in the UK as safe as they possibly can.

Telematics works very simply: a device that’s fitted to your car collects information on your motoring performance and then reports back to your insurer, who then runs a data analysis and rewards you with discount car insurance if you’ve demonstrated that you can drive in a safe, responsible manner. It’s a great way to save cash – an important enough facet in the current economy, but it also makes the roads safer for those who don’t have telematics cover as well.

Since you can only benefit from the discounted cover if you drive safely and responsibly, it may seem a bit odd to consider you’re actually helping other drivers as well, but you actually are: if you’re driving slower and with more care, you’re less likely to be involved in an accident with someone else, regardless of what kind of cover they have, and this leads to lower accident rates.

Not only that, but telematics customers also tend to cause and sustain less damage and injury in an accident they’re involved, since they’re traveling slower and more carefully. This leads to knock-on effect of making the nation’s roads that much safer, and the more people that use telematics, the bigger the knock-on effect is.

Women have a new best friend

The old saying goes that diamonds are a woman’s best friend, but telematics may be an even better friend than a lump of carbon when it comes down to it. Telematics-based insurance is not subject to the European Court of Justice ruling that insurers cannot assess risk by taking gender into account any more, and with this ruling going into effect in December of this year, many female drivers – especially younger ones – are going to face massive rate hikes at renewal time.

However, since gender is never taken into account in a telematics policy, female drivers can earn and keep discounted rates, just as their male counterparts can. In fact, since female drivers statistically exhibit safer motoring habits than men do in the first place, the likelihood that women will benefit from a telematics-based insurance policy are that much higher; just don’t tell the ECJ.

© 2012 All rights reserved. Reproduction in whole or in part without permission is prohibited.

Image: No Insurance by BinaryApe